Driving across Sweden, and following a typical Swedish lunch in none other than IKEA, we finally arrived in Norway’s capital, Oslo. Despite being exhausted, I took the opportunity to explore our stop off before checking in – Vigeland Sculpture Park, a park in the city that’s home to hundreds of statues created by Norwegian sculptor Gustav Vigeland. It was a pleasant walk through and fun watching everyone trying to mimic the sculptures, but I was especially relieved when I had my room and could fall comfortably onto my bed.

Day 2 in the city involved both walking and cycling, and recovering afterwards… While I didn’t get much touristic stuff done in Oslo, it’s still been a nice stop, and the vibe is so chilled out no one particularly minded not fitting everything in. 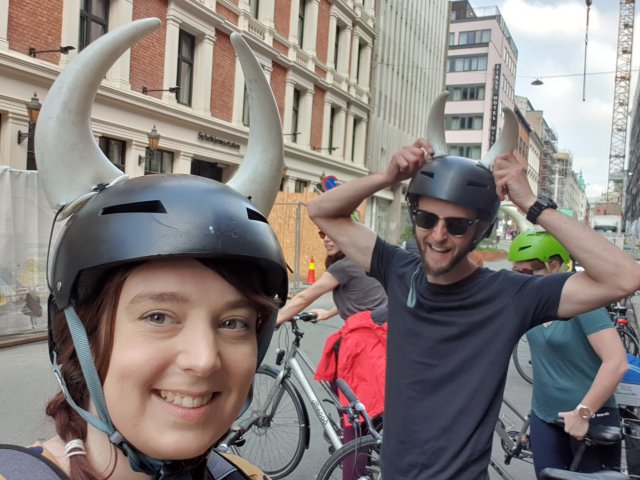 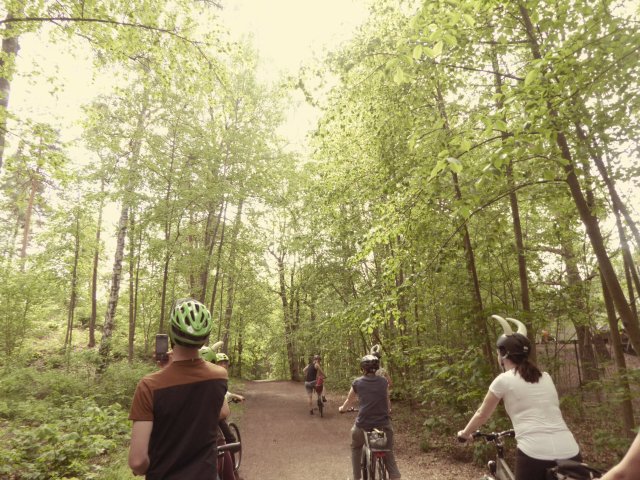 The Viking Biking tour was first on the agenda, after a guided walk through town to the start point. This cycling tour sees you heading out on an approximate 3 hour journey around the outskirts of the city, horned helmets included despite the real vikings actually having never had horns on their helmets. The sun shone as we traversed the roads and rolling hills of the forest, stopping off at The Viking Ship Museum.

The Viking Ship Museum isn’t big and unless you have a particular interest in vikings it’s slightly out of the way, but it’s still cool if you want to see wooden viking ships and a funky video projected onto the wall telling the story of the vikings of Norway.

The next and final stop on the tour was the beach on Olso Fjord – stunning views and a chance to go into the icy waters in what’s called a polar plunge. I’ll save that one for another time though! This cycle tour can be tough on the legs as there are a lot of light uphill stretches. If you’re unfit, take that into consideration.

Otherwise, it was a morning well spent. Well and truly exhausted, a few of us stopped off at the harbour front for street cart food, before checking out the nearby Akershush Fortress. From there, it was a wet trek back to the hostel as the thunder roared and the rain set in for the evening.

But, it takes a little more than a spot of rain to dampen anyone’s spirits when having a good time, and last night’s antics were the best yet. Yes, we didn’t just hit up a bar, we went bowling. Oslo is home to a cool bowling bar with multiple areas and pool tables, well worth a visit for great fun and vibes, and a well stocked bar. And I had my first ever fireball whiskey. The perfect end to our whirlwind visit to Norway’s capital.

As a whole, Oslo is a cool, laid-back city, but being more modern than some places in Europe there’s not an abundance of historical landmarks to take in, so bear that in mind if you ever decide to visit.

Had a lovely walk in Cleethorpes this afternoon. I don't suppose it's that bad here really... #pretty #nature #outdoors #beach #marshland #allthebirds #nofilters #wintersun #walkswithdad
One of my New Years resolutions is to read more, so starting as I mean to go on. Let's do this! #reading #books #storytime
Cracking start to the new year last night. Suffering for it now though! #nye #happynewyear #drinking #outout 🥳🎆🥳
I think it's fair to say that my 2019 has been a year of both dizzying highs and spectacular lows, but some of my highlights have to be fulfilling my dream of taking a hot air balloon ride over the mountains of Turkey's Cappadocia region, spending my birthday on the stunningly beautiful fjords of Norway, and dancing barefoot in a barn on a small farm in North Yorkshire at midnight without a care in the world. So, here's to 2020, a new year and a whole new decade of untapped potential. Happy New Year everyone x