The sunrise was pretty on Thursday morning. No balloons as they depart from further away, but a nice start to the day regardless. Sitting out watching the sun come up, scarf wrapped snuggly round my shoulders as sparrows flitted about and the local cats began to venture, was a peaceful feeling. No sound to be heard except those of nature waking up, cockerels and insects, tweeting birds.

After the busy first day we had in Cappadocia, this day was a slower one. The plan was to leave our pretty little cave hotel and go on a hike for a few hours through the valley, but I declined, choosing instead to have some down time with my book and save my legs. Walking round here isn’t necessarily easy, after all. Regrouping with everyone for lunch we hit this cool little restaurant called Fat Boys, with an outdoor seating area made up low tables and bright rugs and cushions – so adorable. And even better, burger and fries was on the menu! The rest of the day was free time, so I explored some of the local shops for a short while before retiring to the pool area to continue my rest and relaxation. Utter bliss.

We rounded off the day with what our guide referred to simply as Turkish Night, a fanciful affair with food, drink and entertainment included in the ticket price. And honestly, it was the most fun. Definitely something to remember, with professional performances as well as the opportunity for everyone to get up and dance and have a go. 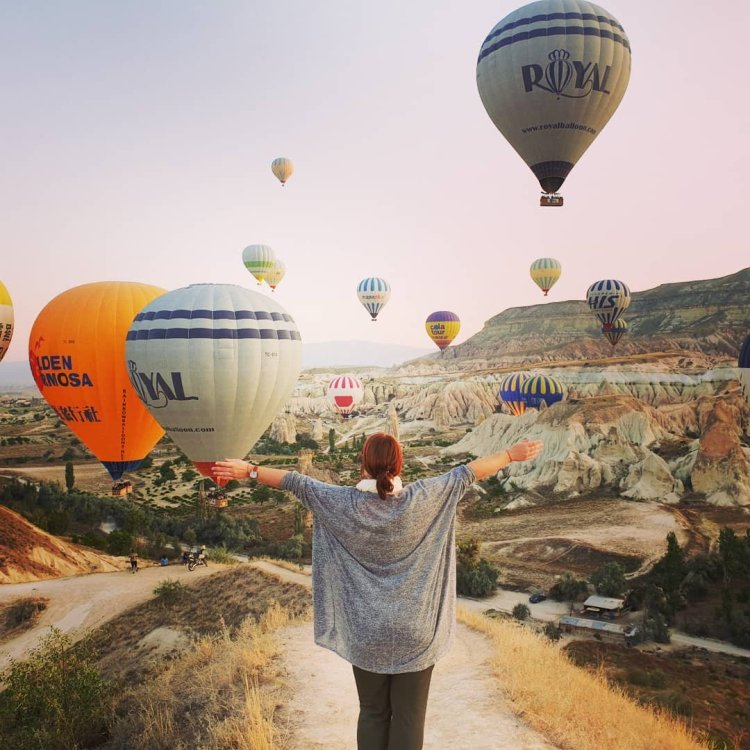 Despite the late night on Thursday, it was yet another early morning today and this time, it was heading out into the valleys for some final balloon spotting. And wow, was this worth getting up for. I had been slightly concerned again about the walk, but I’m only here once. Don’t want to leave with regrets. And now I won’t, because as far as views go, it doesn’t get much better than this. The balloons surround you at every angle and it’s like you’re in a dream, from when they first take off to when they’re high in the skies above. It’s the kind of phenomenon that will make you believe in magic just that little bit more.

Honestly, there is not that much to do in this part of Turkey so you wouldn’t want to spend long here, but it’s definitely worth visiting for a couple of days, 100%. I can almost guarantee you’ve never seen anything quite like it.

I’m currently on the bus that will carry us to Istanbul overnight, ready for the final chapter of this Turkish mini break. I’ll miss it here, but looking forward to what’s still to come.